by José Manuel Araque
Osvaldo Fresedo traveled to the United States in 1929 and ended up staying in New York for almost a year. One of the highlights of his stay in the City was his presentations on Radio. But even after he left, Fresedo kept “coming back to New York” via shortwave transmissions. Most of these programs were broadcast nationwide over the Blue Network of the National Broadcasting Company (NBC).
Radio was a hot new medium since at least the 1920s, and New York was at the epicenter of the boom. There was a lot of experimentation on Radio then, even the frequencies were not cast in stone for a while. The format and programming of the medium was up for grabs too, and the result was a kaleidoscopic prism of cultural life developing in real time over the waves. 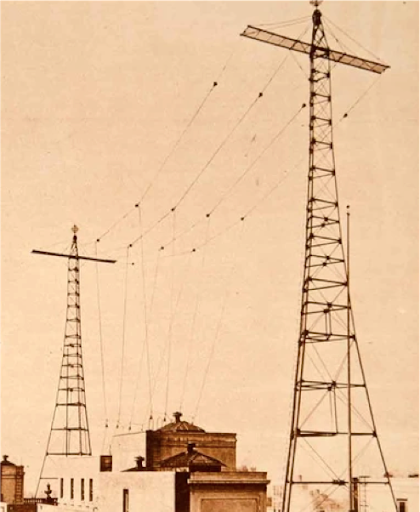 1. Fresedo on New York Radio in 1930
In January 1930, and for the next four weeks, we find Radio listings showing a "Lombardo Típica Orchestra" playing on WPCH Radio. Sebastián Lombardo was Fresedo’s pianist. It seems quite possible that Fresedo did not take credit for these appearances just as he did not take credit for several live performances around New York starting in October 1929.

On March 13 we found a mysterious listing in a Pittsburgh, PA radio station. We think this was a test run for the April program on WJZ. 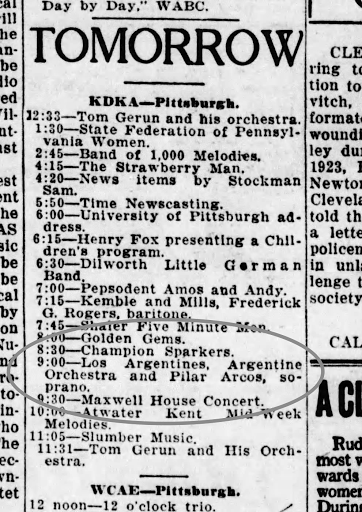 Many of Fresedo's Radio programs in the US in the 1930s aired on WJZ Radio, the flagship station of NBC's Blue Network. On April 3, 1930 Fresedo was finally fully credited in a presentation on WJZ with Pilar Arcos. The next week, on April 10, he was on WJZ accompanying Cuban baritone Adolfo Utrera. 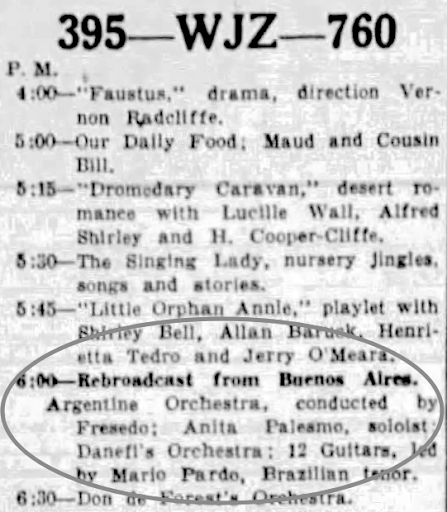 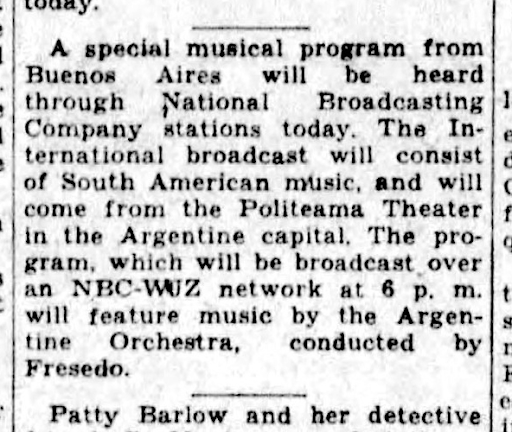 The shortwave radio transmission originated at the Politeama Theater in Buenos Aires, and Osvaldo Fresedo led his orchestra with Anita Palermo and Mario Pardo as vocalists.

Judging from the note in La Prensa the following morning the "experimental" transmission was a success.

3. Fresedo in New York in 1934
Around 1933, Osvaldo Fresedo became involved with the problem of securing artist royalties and copyrights. The Asociación de Autores y Compositores de Música (Association of Authors and Composers of Music, AACM) was formed, and coincided with the opening of discussions in the United States Congress on the subject of medium, content ownership and related matters. To that end the Telecommunications Act of 1934 was enacted into Law in the United States. With the expressed intent to address US Congress and ASCAP, Osvaldo Fresedo embarked on his third trip to the United States on the Western World (of the Munson Line of course!) on September 1934

Fresedo travelled with Dr. José Eduardo Ríos, a legal advisor to the AACM. On September 28 they were in Rio de Janeiro meeting with their Brazilian counterparts 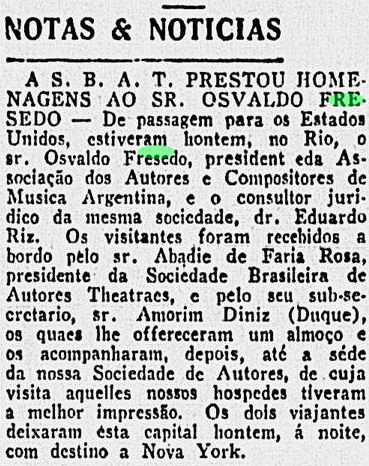 As far as the motive of the trip is concerned, it was not quite successful: Fresedo eventually folded the AACM and SADAIC became the representative of Argentine composer rights since then. But while in New York Fresedo was invited by NBC to play a concert at Radio City Music Hall. 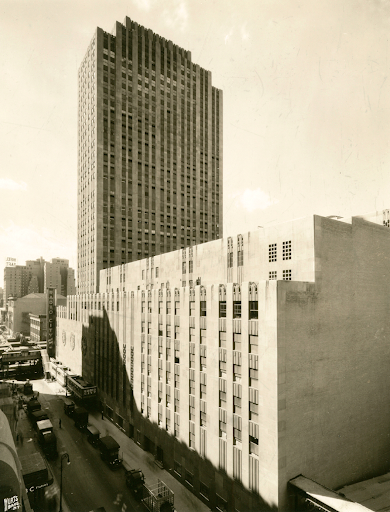 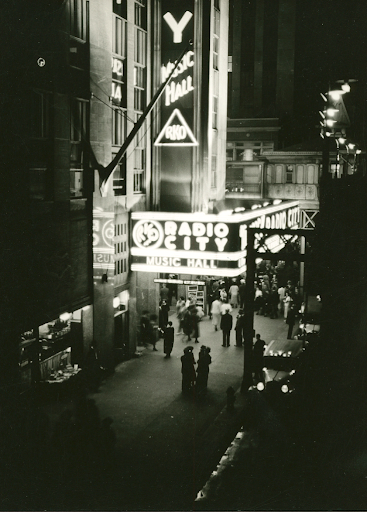 Fresedo spoke excitedly about this night in his interview with Oscar Zucchi: "this was the crystallization of an intimate desire, to conduct a world-renowned symphony orchestra. Do you know what orchestra they offered me to give my Tango concert at Radio City, back in New York?  No less than the Symphony Orchestra conducted by Toscanini. I couldn't believe it, but that's how it was. And there I was, as was first violin Remo Bolognini, a wonderful madman that I met in Buenos Aires and we used to ride together on motorbikes with his brother who was a cellist, a great cellist. What was his name? Well, I’ll remember it later.” [He was referring to Ennio Bolognini]. 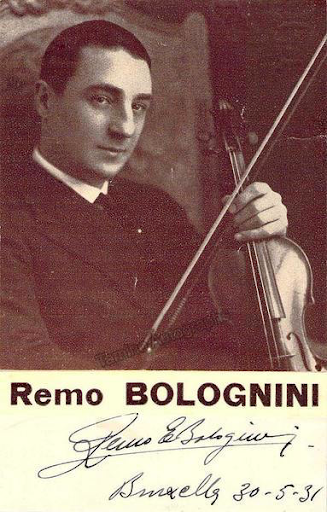 Of course Fresedo played the bandoneon, and Fresedo clearly states that Remo Bolognini played with him, but that’s all that's certain about the composition of the Orchestra that night. Remo, for some the finest South-American violinist of the Era, played for the New York Philharmonic and was Concertmeister under Toscanini (who was not always in Town). But the Philharmonic records show that they were playing at Carnegie Hall that night under Werner Janssen. The Radio listing itself is not conclusive either, as it credits some generic “Concert Orchestra”. We think it is more likely that Remo assembled the Orchestra for the great night. Four months later Remo played with Terig Tucci’s Orchestra (with Rafael Galindo and Horacio Zito) in the historical recordings Gardel made in New York in 1935. We think Remo was friends with Galindo and the others since earlier in the decade, and they were all on the violin section that night.
In 1934 Tango legend Carlos Gardel made a big splash in New York, starring in multiple movies made at the Kaufmann Studios in Astoria, Queens. Fresedo invited Gardel to sing for him, but Gardel could not sing that night, and Carlos Spaventa filled the role of chansonnier. 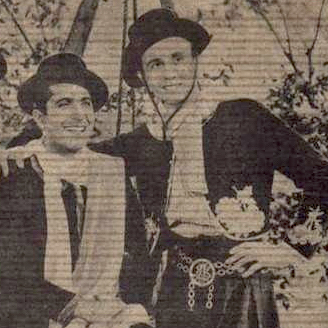 Fresedo continues: “At that concert, which was unforgettable, were Carlos Gardel and Le Pera, Tito Guizar, Mr. Peer (an American publisher), his secretary and then wife and today a multimillionaire widow, Mrs. Monica Iberson; Adolfo Avilés (the author of “Los ojazos de mi negra”); Mr. Ralph Todd, Dr. José Eduardo Ríos, and a lot of friends. Carlitos was going to sing with the Symphonic, but he was working hard on one of his films and could not rehearse. I included in the program, among other songs, Aguacero by Cátulo Castillo, Vida mía that I composed with my brother Emilio, and opened and closed with Canto de amor.” 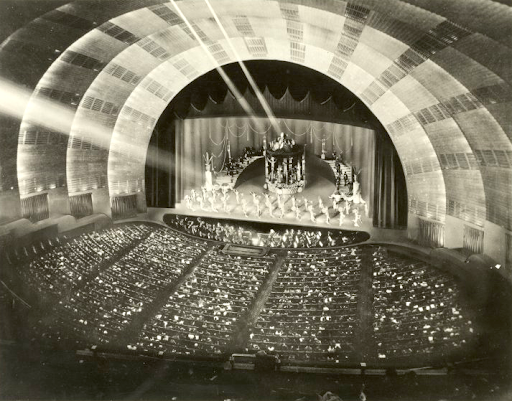 The Maestro’s concert on Radio City was broadcast on WJZ on Thursday, November 8, 1934 at 8:30 PM, and not on November 9 as the interview with Zucchi states. Curiously, The New York Times Weekly Listings from the previous Sunday show the slot used by Fresedo as “To be determined”, pointing to some last-minute decision in the booking of the Orchestra. 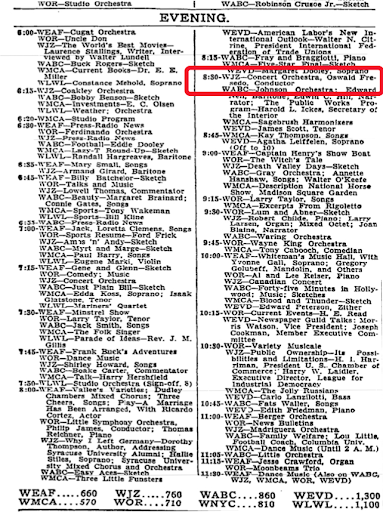 The event barely got a mention on La Prensa. 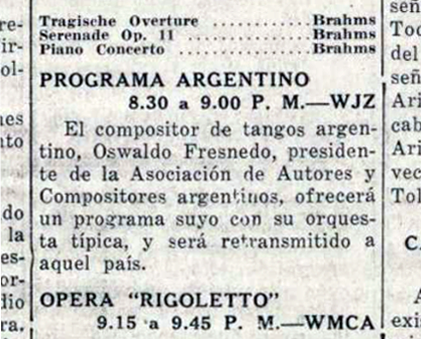 4. From Buenos Aires on record

Since 1934, NBC started recording and archiving selected radio transmissions on WJZ and others. On May 18, 1935, WJZ transmitted a hybrid local/shortwave program called "Radio City Party" featuring Osvaldo Fresedo in Buenos Aires and Benny Goodman in New York. We don't know the detailed program for the night, but we have reasons to believe a copy may exist somewhere. 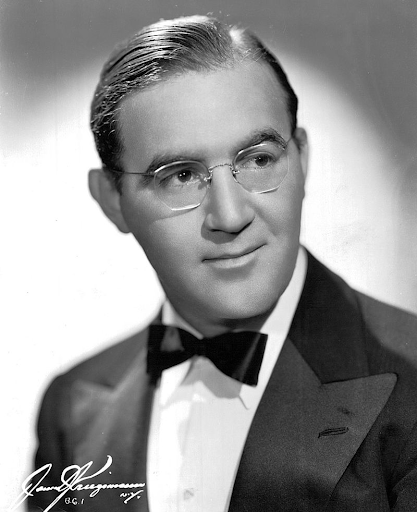 On November 11, 1936, the story takes a surprising turn. At the time Buenos Aires was abuzz with talk of the upcoming Inter-American Conference for the Maintenance of Peace and President Roosevelt's visit. The celebration of the 10th Anniversary of NBC added to the right moment to present a musical Salute from Buenos Aires. 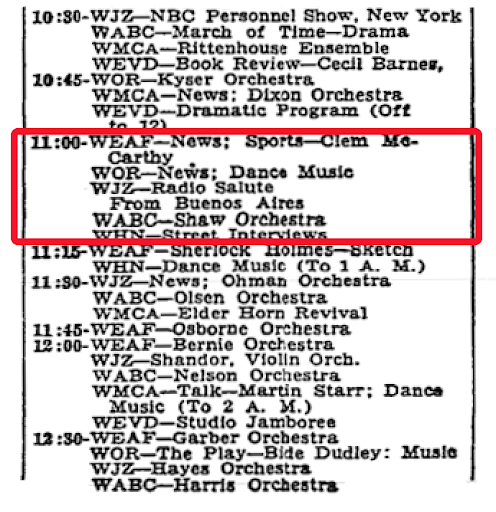 The choice of program for that night says a lot about Fresedo's presentation card to the American audience: his new Orchestra and Sound heralded a new Era for all Latin music, not just Tango. This extraordinary transmission has sat with nary a listen in an archive in the United States.
[PLEASE Honor the System, Do Not Copy or Redistribute].
On December 6th of the same year, and overcoming some atmospheric challenges, Fresedo returned to US Radio in a brief trasmission of his hit Vida mía. 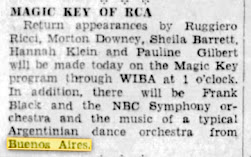 In June 1939, Metro-Goldwin-Mayer premiered the movie Second Fiddle. The film was a star vehicle written expressly to highlight Sonja Henie, a Norwegian skater that made a name in the 1936 Winter Olympics in Germany. Rudy Vallée was in the movie where he sang, amongst others, Irvin Berlin’s When Winter comes, the theme song of the movie. On June 26, WJZ produced a program featuring a diverse cast including Jimmy Dorsey and others. Fresedo was invited to contribute an instrumental Tango version of When Winter comes. A fragment of this performance has survived. 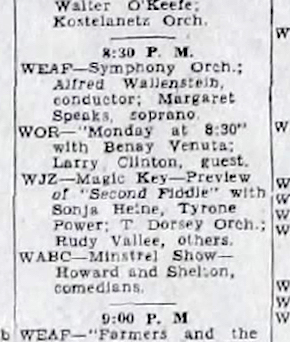 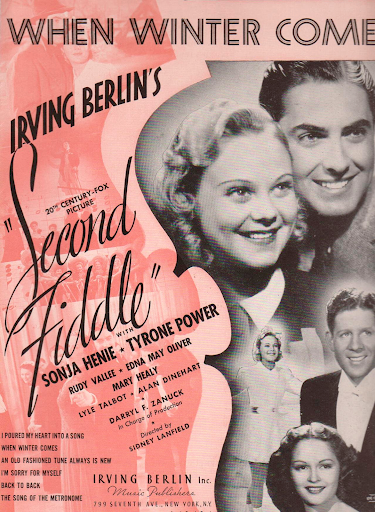 Finally, the 1939 World Fair in Flushing, Queens was a huge affair involving delegations and exhibitions from many guest countries. On April 21, 1940 Osvaldo Fresedo and Ricardo Ruiz appeared via shortwave in a Radio program entitled “Salute of the Americas to New York's World Fair” that was broadcast in a station in Richmond, VA and not in New York. We can only imagine what that 65-piece Tango Orchestra sounded like. 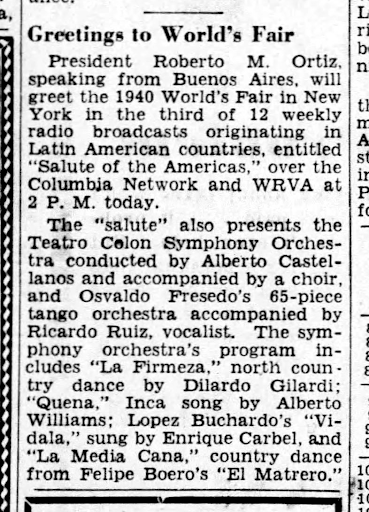 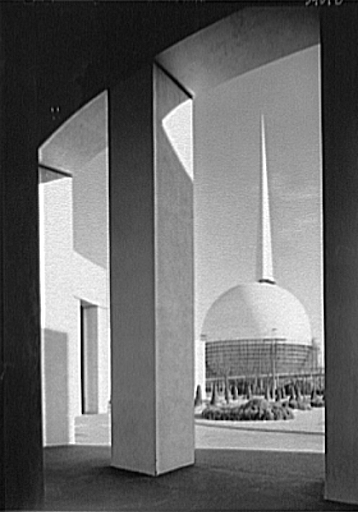 5. Summary
The following table lists the known Osvaldo Fresedo Radio broadcasts in the United States from 1930 through 1940
Notes
1. Roberto Ray’s rendition of Nostalgias seems to answer the age-old question “who did Cobian compose Nostalgias for”? Surely Fresedo’s melodic take seems more attune to Cobian’s sensibilities than Lomuto’s rhythmic approach (recorded in October 1936, a very popular version at the milongas). Fresedo never committed his version with Ray to disc.
2. After finishing production of his movie Laughing Boy in April 1934, Hollywood megastar and Latin icon Ramón Novarro went to Buenos Aires on tour. 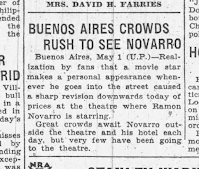 Fresedo composed Canto de amor expressly to be premiered by Novarro. Watching Novarro sing in his 1933 hit movie The Barbarian (with Argentine actress Mona Maris) one gets an idea of what Fresedo had to work with.

3. Any information regarding the lost transmissions is highly appreciated.
4. PLEASE Honor the System, Do Not Copy or Redistribute.

1. Mark John for his patience waiting for this one.
2. Camilo Gatica as usual.
3. Jorge Uresandi in Buenos Aires. 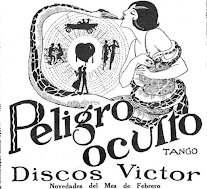 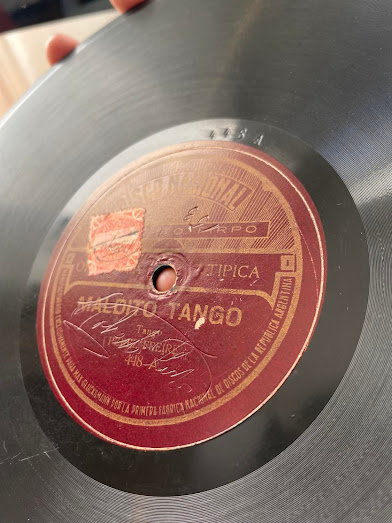 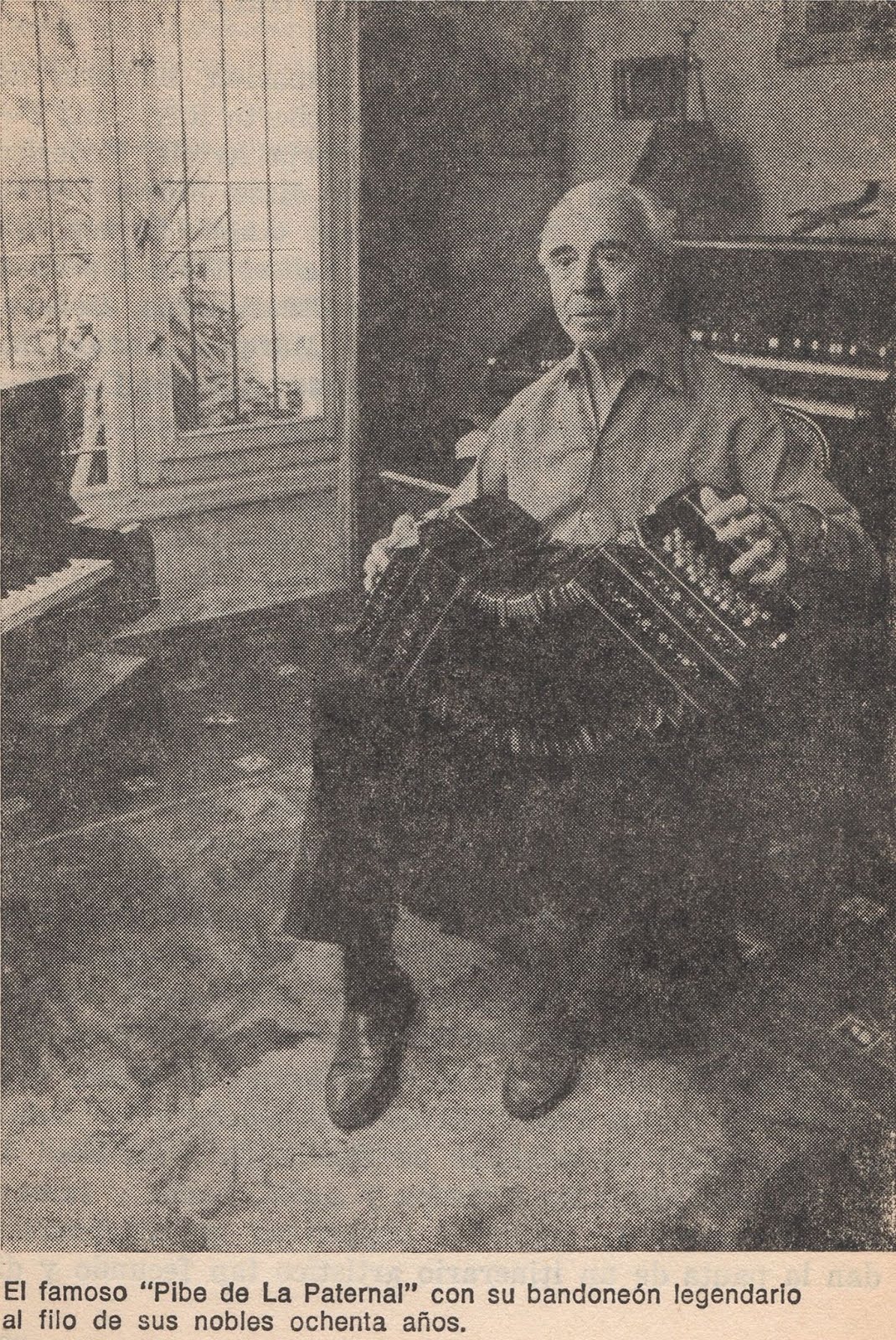