Tango from Buenos Aires on US Radio in the 1930s

The Radio “experiments” of the 1930s were not limited to Osvaldo Fresedo. In the 1920s the Pan-American Union, the core of which became the Organization of American States (OAS), promoted transmissions from and to South America, aided by the American government, and with the assistance of the US Navy. Following these, commercial radio broadcasters looked search for ways to link the continents through the use of short-wave technology. 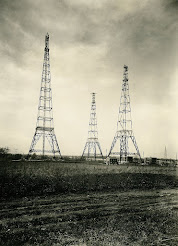 A search in the newspaper archives found more than 10 transmissions initiated in Buenos Aires by famous orchestras and singers in the 1930s. These transmissions were only recorded and archived after 1935, and then only some. The first one was reported on The Philadelphia Inquirer on April 17, 1932, from CBS Radio. The news item noted that Tango was on the program that night, but no other details are shared. This transmission happened a few months before Fresedo’s transmission from the Politeama Theater on October 17, 1932. 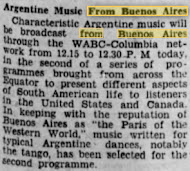 From January 29 until February 26, 1934 we found several experimental transmissions by Miguel Caló on CBS Radio and affiliates around Boston. We have no further info on them either. 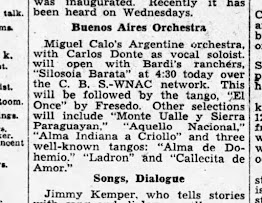 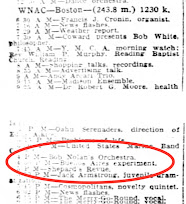 Since September 1935, in New York and around the nation, WJZ’s program The Magic Key of RCA epitomized the spirit of Pan-Americanism, regularly showcasing Latin American orchestras alongside famous American Jazz orchestras. 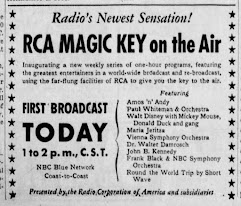 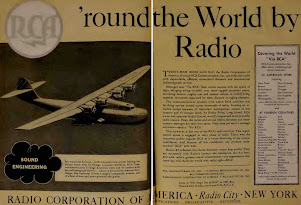 On December 1, 1935, Edgardo Donato and his orchestra reached the North-American shores via radio, with beautiful renditions of Gerardo Matos Rodríguez's La Cumparsita, and Agustín Bardi's Tierrita. 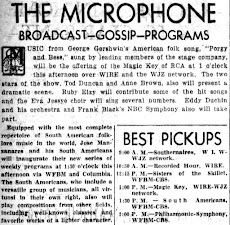 On March 9, 1935, in New York, WABC broadcast a concert by the Francisco Lomuto’s Orchestra. And on April 19, 1936, The Magic Key also included a segment from Buenos Aires by the Lomuto Orchestra, with Tommy Dorsey on the American side. On this occasion the Típica played the hits Nunca más and Si dejaras de quererme, with Fernando Díaz as the lead singer. 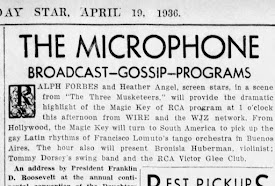 The year 1936 saw increased interest in the business of transatlantic radio, possibly as a prelude to Franklin D. Roosevelt’s visit to Buenos Aires which took place in December of the same year. Earlier, on February 24, WABC in New York broadcast one “Carnival Dance from Buenos Ares”, maybe it was Lomuto too. And on May 10, WABC and affiliates in the New York area broadcast a concert by “a 90-piece band combining the five outstanding orchestras in Argentina”. Because of its similarity with another transmission, we speculate that Fresedo directed this extraordinary concert. 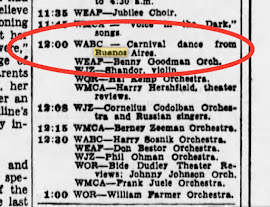 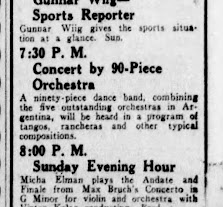 On October 11, 1936, and on the eve of the anniversary of The Magic Key of RCA, Edgardo Donato again performed from Buenos Aires, this time he brought to the airwaves his hit A media luz.

On February 21, 1937, the St. Louis Globe reported on a transmission from Buenos Aires by Roberto Firpo with his Quartet and Orchestra, and singer Carlos Varela.

and on September 27 of the same year, they brought Pedro Laurenz and Héctor Farrel interpreting Nostalgias, a recent composition by Cobian and Cadícamo that was very popular in the US.
Finally, on November 14, 1937, The Magic Key of RCA aired a performance of the Orquesta Típica Victor, with Federico Scorticatti as conductor, and Oscar Serpa as chansonnier interpreting the classics Caminito and Adiós muchachos. 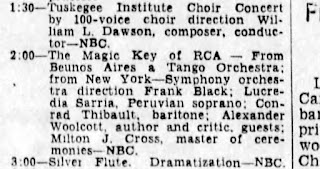 Notes
1. [PLEASE Honor the System, Do Not Copy or Redistribute any material in this page].
Acknowledgements
1. Mark, for retouching the tracks, as usual incredible work!
2. Leo Palludi for that pic of Laurenz. Grande!
Eingestellt von José Manuel Araque