Paris was in love with Dance forever, it seems. Certainly, well before dancing steps were coded into manuals, Parisians were going out to public dancing halls, and cafe-concerts. 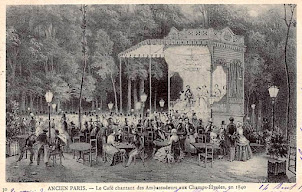 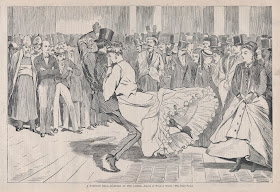 The consequences of the French and the American Revolutions went far beyond politics and economics, cultural life and the Arts changed too. The World seemed slightly bigger back then, it took a ship two weeks to cover the distance from Buenos Ayres to New York, Barcelona, or Marseille. Paris became a huge destination when the fourth Exposition Universelle took place there on the Centennial of the Revolution, from May through October 1889. The Eiffel Tower was built as part of the Expo. Some countries still under monarchies boycotted the Expo, but it was a huge success nonetheless. Suddenly everyone wanted to go to Paris, not only to see the French, but to see other cultures, and to be seen. Paris became “full of people that were not French”, 32 million visitors came in the 6 months the Expo was open. 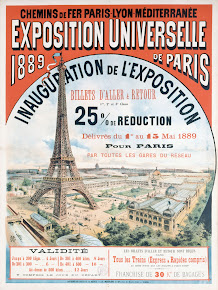 The Exposition Universelle was a significant cultural affair like no other the World had seen, it was a "spectacle to end all spectacles" [Fauser]. It showcased the achievements of the French Revolution, but it also acted as an enormous Encyclopedia of knowledge, and a huge display of products from all around the World. And it served as a turning point in the understanding and appreciation of Music. New technologies were demonstrated in the Galerie des Machines and other pavilions. Edison's cylinder phonograph was at the Expo (it was patented in 1880, but mass-production started in 1888), as well as Bell's telephone. People lined up for hours at times, to see and listen to these wonders. Edison himself visited the Expo in late August, he got a hero's welcome. 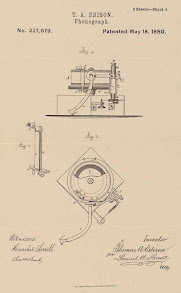 In accordance with the increased interest in the concept of "the national", the music of "the peoples" (folk) was on display too. Javanese, and Gypsy music took center stage, though there was also a message that Classical music was superior to others, the zenith of human achievements was European culture after all.
Argentina made a big splash at the Exposition with its costly pavilion (1.5 million francs) 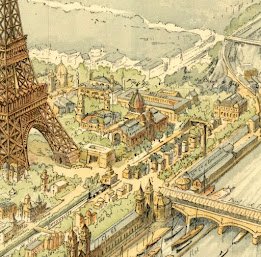 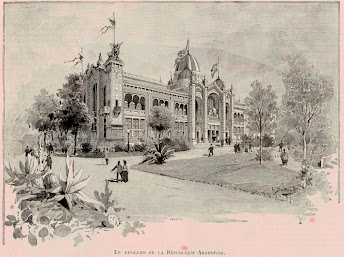 but there is no evidence that anything "cultural" took place there, the centerpiece of their display was a refrigerator showcasing fresh meat and vegetables.
Everything Spanish was the rave in Paris those days, and Classical composers like Emmanuel Chabrier followed suit with compositions "a la Espagnole" that were featured in the Exposition. But it was the arrival of dancers from Granada, dancing the Tango, that truly captivated the audience. This was the first time Europeans heard of this derivative of the Habanera. 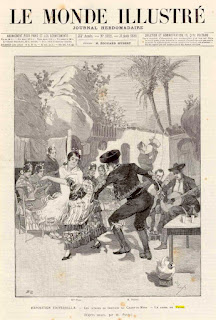 Three years after the Expo, in 1892, the Pôle Nord (North Pole), Paris’ first ice-skating rink opened on 18-20 Rue de Clichy, around the block from the Théâtre de Paris. 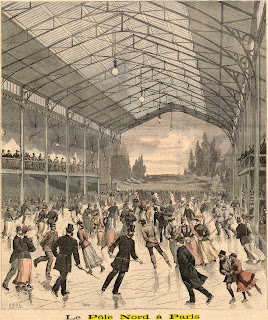 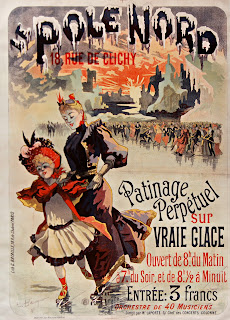 Since the late 18th Century, as attitudes changed, the nightclub was born, going out at night was democratized. The music-hall (or cafe-concert) blossomed too, a sort of small theater for the common man, unencumbered by the stodginess of the Classical tradition. The legendary Cafe des Ambassadeurs dates back to 1772. Other places followed, like the Alhambra in 1866, the Folies Bergère in 1869, and the Théâtre Marigny in 1883. And following the Expo, the Jardin de Paris, which later became the cabaret Moulin Rouge, opened in Montmartre. The Moulin became famous not only because of the creation of the can-can, but for the novel design that allowed for rapid changes to the décor and stage. 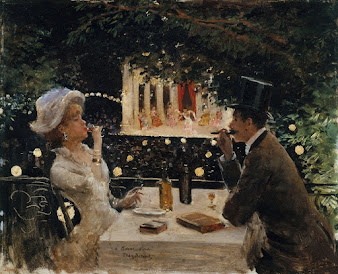 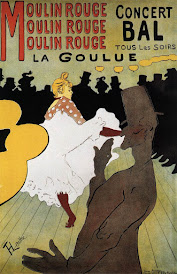 In 1893, the Casino de Paris opened next door to the Pôle Nord. The Casino was a multi-purpose venue, it was as much a music-hall, as a place to see theater, dancing, circus attractions, even wrestling. It was gorgeous, extravagant, and it became one of Paris’ major attractions too, performers from around the world came to show their acts there. 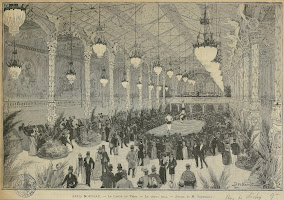 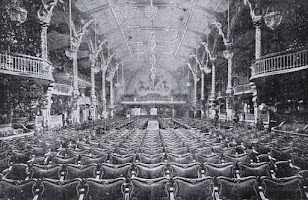 By 1899 the Pôle Nord had folded, and the location was up for grabs.

Yet another Exposition Universelle took place in Paris in 1900, and the incipient field of Motion Pictures was one of the technologies that was prominently showcased. At the turn of the Century, the Paris of the Belle Époque was probably the hottest destination on Earth, everything that happened in Paris set trends for other capitals to follow. The boom in the Arts was unequaled, and so was the proliferation of venues of leisure. But when La Belle Otero danced at the Marigny and others, it was the Andalusian Tango that was still front and center, and there was little or no Argentine Tango in Paris. 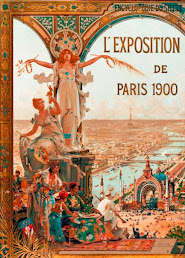 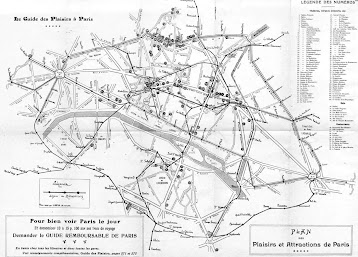 Following the latest Expo, the brothers Lumiére opened up the Photorama at 20 Rue de Clichy. The Photorama is a historical curiosity, a testament to the inventive mind of the Lumiéres, but it did not stay around too long. 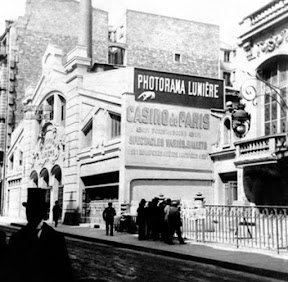 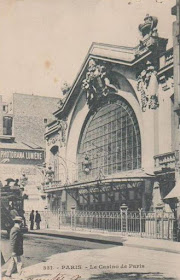 By 1903 the Photorama had folded too, and La Boucle, a music-hall of sorts, operated at the address. Next door the Casino was booming, but 20 Rue de Clichy seemed a bit in need of a renovation, to keep up with its neighbors. To be sure, it's not like Paris needed a new music-hall, in 1904 Auguste Bosc opened the famous cabaret Bal Tabarin too. 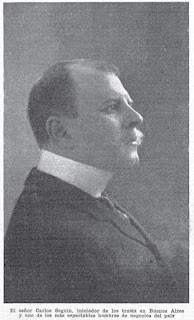 Charles Séguin was born in Paris in 1877, and in 1895 he moved to Argentina. Since 1870 until 1910, there was a large influx of immigrants from France into Argentina, following incentives by the Argentine Government (meant to counter-balance the even larger influx of Italian immigrants), and the Franco-Prussian War. In time, more than 100 thousand French moved to Argentina, specially Basques. The traffic of steamships from Europe to the River Plate rivaled the traffic between Europe and New York. The population of Buenos Ayres saw a five-fold increase during that period. In Paris, there was a growing contingent of Argentine aristocrats too.

Séguin was highly ambitious, and moved up very quickly. Ten years later, he had investments in all sorts of enterprises, he was a developer, an industrialist, he ran "trusts", and he became fabulously wealthy. The source of Séguin's wealth is the stuff of legend and speculation, he seemed extremely adept at staying "behind the scenes". When Enrique Cadícamo wrote about Séguin in his "Historia del Tango en París" (History of Tango in Paris, 1975), he highlighted Séguin's ties to the Lombard brothers, who were said to be linked to the underworld in Marseille. Cadícamo suggested that the Lombards were linked to prostitution. These were still the days when a woman on stage, dressed in anything but "proper attire", was considered a moral transgression, and the Lombards were known to run places where spectacles "less than decorous" took place. The Casino de Paris itself became known as a place where these kind of performers were featured too. 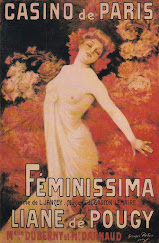 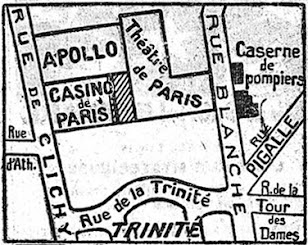 It’s not known how Séguin came across the opportunity, but in early 1906 he entered in a partnership with Alphonse Rigod and Ernest Rottenbourg in Paris, and took controlling interest in 20 Rue de Clichy. Séguin returned to Buenos Ayres on March 17 of that year, and left Rigod and Rottenbourg to run with the plans.

Did Séguin mean to bring Argentine Tango to Paris? In Buenos Ayres, he was also involved in the Sociedad Treatral Ítalo-Argentina, and at the same time he took ownership of a lot where he started building the Teatro Esmeralda (later Teatro Maipo). In time, he had his hands all over the night scene in Buenos Ayres, with controlling interests in everything from the first skating rink there (Palais de Glace), to legendary dance halls where Tango flourished in the first quarter of the Century (e.g. Pabellón de las Rosas, Royal Pigalle). In May 1906, the papers for the renovation of 20 Rue de Clichy were filed, the place closed, and a tall fence was erected to block the view of the ongoing works. Almost one year later, on Saturday March 30, 1907, Paris came to see what Séguin and his partners were up to, as the Théâtre Apollo opened its doors in a "soirée de gala". One "maestro Gauwin" conducted the orchestra, there were singers, acrobats, mind readers, even the introduction of a new "danse du Serpent Boa" by Jean Daris. The Apollo had a vast hall leading to the main floor, which was elegantly painted in light blue and ivory, and was illuminated by close to 4000 electric lamps. The total capacity was close to 500 people. Jacques Marcel Auburtin was credited as the Architect. 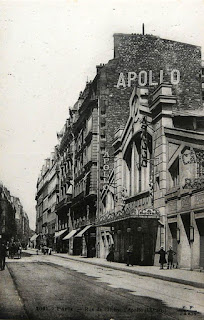 But the pièce de résistance of the Apollo was the reversible floor, which was baptized as Le Basculo. The Basculo was the brainchild of Félix Léon Edoux, a friend of Gustave Eiffel known for his invention of hydraulic elevators. It was said to be around 278 square yards (232 square meters), and accommodated more than 300 seats. It weighed as much as 100 thousand kilos, and rotated on a horizontal axle driven by an electric motor, transforming the floor from theater into ballroom in a matter of minutes. For its construction, a large pit almost 30 feet deep (10 meters), had to be excavated on the site. 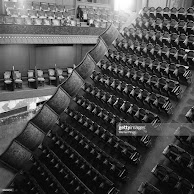 The Basculo became a sensation in itself, all of Paris went to the Apollo at 11PM for months to see the maneuver that would flip the floor. 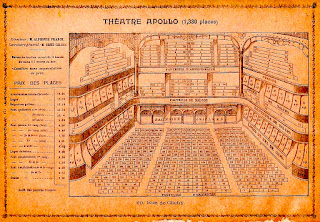 The Basculo was an engineering marvel, but the Apollo was still lacking a clear strategy to distinguish itself from the many other attractions of Paris. What exactly would the program look like every night? Was it going to be a theater or a music-hall, both, or something else? While Paris curiously peeked inside, it was the premiere of Franz Lehár's operetta The Merry Widow on April 28, 1909, that really cemented the status of the Apollo, it was a runaway success. The Merry Widow even played in Buenos Ayres before it played at the Apollo. M. Alphonse Franck, the Apollo's new artistic director, wanted a change, and the Basculo became a footnote. And there was still nary word of Argentine Tango in the French press. 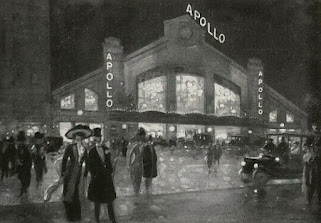 1. Andrée Magda, a French actress, went to Buenos Ayres in August 1905 to play at the Teatro Royal, and stayed for close to 14 months. When she returned to Paris in September 1906, a writer for the journal Fin de Siècle wrote a nice welcome-back piece mentioning her love of Tango, "the favorite dance of the peoples of Buenos-Ayres". Strictly speaking, this is the first mention of the Argentine dance in the French press that we could find, but Mme Magda apparently did not pursue her passion for Tango any further. 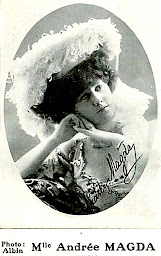 2. The first evidence of Argentine Tango dancing in Europe comes from Madrid, where in December 1906, Las Argentinas performed it at the Teatro Price. But again, there's no evidence they were in France, or where these two were from. And then they "disappeared" a couple of years later. 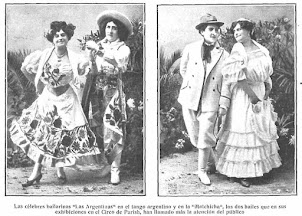